An All American Emperor 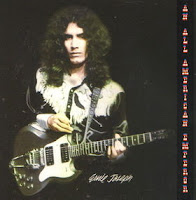 "Ernie Joseph and his first group, The Emperors, recorded these songs, but unfortunately, they were never released until recently. Akarma Records makes a reference to garage in their explanation of the group's sound on their website; I am afraid I must heartily disagree. I heard nothing that sounded even remotely like garage in this music. What I did hear was a singer that sounded something like Gary Puckett. This was pure pop pleasantry. The cover can be misleading as Joseph looks like the consummate rocker. It couldn't be farther from the truth. Later on in his career he may have had a harder edge on his music, but not when he recorded these songs with his group. It sounds no different than the kind of music that was popular at the time...

It's too bad the music buying public didn't have an opportunity to hear this album in the Sixties, because they would have consumed it like a box of fine chocolates. It's always interesting to hear something that never made it to the local record store. You sit and listen and try to understand why it was never released, but everyone worked under different circumstances with different management, and all of that can play major role in whether a group makes it or not.

Although this was a good listen, I was disappointed. As I mentioned before, I attempted to translate what I was going to hear on this LP by looking at the cover. I guess it's human nature to get some kind of a message from an image. The cover really is simple, yet it projects something that isn't found inside. Cover art is meant to convey a message, if there was one here, I didn't interpret it correctly. Okay, I will stop trying to justify why I should have been hearing something different. The bottom line is that this was better than average pop music, a lot better than some of the music that came out in the Sixties." (by MusicDish)