The Night Ernie and I Met Jimi Hendrix 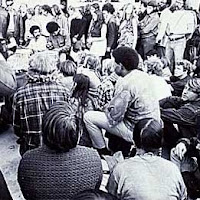 My friend Debi lived in Goleta, just a mile from the UCSB student village, Isla Vista. Despite the block-after-block layout of mid-century apartment buildings, the hippies hanging out at Peoples Park, the political activism, and the strip of coffeehouses, mod boutiques and head shops had earned "I.V." the unofficial title of "Haight-Ashbury South". It was a place that was cool enough that Edie Sedgwick spent the end of her young life there. Today it is best known for the riots of 1970 during which the Bank of America was burned to the ground. But before all that happened, Isla Vista was a great place to hang out, promenade in your hippie finery and frippery, enjoy a hot cider while listening to folk music at The Brazen Onager, or crash a party. I often spent weekends and school breaks at Debi's house, and we'd spend most of our time at I.V...

Debi was a model with the La Belle Agency and through her I sometimes modeled petite fashions for affluent mothers who lunched in El Paseo in Santa Barbara. We also modeled together for students at the Brooks Institute of Photography, but while I was gamine-like and fit in with the look of Mod Swinging London, she was the quintessential California Girl: blond, tan, and sexy. And she knew how to use it.

On this particular weekend we'd gotten tickets to the Jimi Hendrix concert in UCSB's Robertson Gym. Debi was on a strict schedule of phenobarbitol. I just Googled it and learned that she must have had epilepsy, but she never spoke of it. I remember that her mother came into the bedroom every night and woke her up to give her a pill. She saved a couple of them up for the concert, and as soon as we were dropped off at the gym, we found a water fountain. I'd never taken anything like that before and it knocked me into a stupor that made everything around me move slowly. At that point in my life I'd only smoked a little pot, and this was entirely different.

In those days, no one sat in seats at concerts. Everyone just sat on the floor, stood near the stage, or danced. Being a musician, I was the standing sort, and we found a great spot to the right of the stage, directly in front of one of the speaker stacks. We were close enough to bassist Noel Redding that we could see the scuffs on his boots.

The concert was fantastic and, despite the drugs, I have a vivid memory of Jimi's performance. Just as The Experience launched into their encore, a guy came up to us and told us to come with him. Being on drugs for the first time, I immediately became paranoid, afraid that "they'd" figured out we were high (yeah, right... two chicks in a gym full of Hendrix fans...), and were going to give us to the police. Funny, now that I'm older. We looked at each other, scared, and followed him. Mostly, I was pissed because I was going to miss Jimi's encore, Foxy Lady.

The guy led us into a large back room in which a long table was set up as a buffet. I didn't understand what was going on, but in a few moments the doors opened again and Ernie and Cory walked in. We spoke a little bit and I noticed that drummer Mitch Mitchell had drawn Debi away and was chatting her up. What was happening began to dawn on me: Mitchell had seen her in the audience and told one of the roadies to bring us backstage.

There was a stir at the door and in walked Jimi. He was a small man, probably no taller than 5' 4". Actually, all three of them were short, but they possessed enormous presence. Jimi looked around the room, said a word or two to a couple of people, then walked right over to me. He was quiet—shy, even—and began talking to me. That's when it hit me that he'd wanted to meet me! He asked me if I was a "Santa Barbara bunny" and I replied that I couldn't even swim, much less surf. I remember that he laughed. I told him I was a singer/songwriter and he was immediately interested, asking me questions about my style, my influences, and my goals. After a while he asked me if my girlfriend and I would like to go and party with him and the band and, like the naive 16 year-old that I was, I explained that Debi's dad was picking us up at ten. Jimi was very sweet and very respectful as he steered the conversation back to music. Ernie met Jimi as well and they had a friendly talk in the dressing room. Ernie clearly recalls Jimi's down-to-earth and magically humble qualities as the rock legend leaned against his dressing room mirror, conversing with his fellow musician. Ernie and Jimi became friends and met up later in 1969 at a Devonshire Downs Music Festival.

When I learned of Jimi's death at the age of 27, I was sad for a long time. Despite his wild reputation, Jimi Hendrix was a gentleman in the purest sense of the word who will always own a warm corner of my heart. That I was able to share such a huge experience with Ernie makes it even more meaningful to me.
Labels: Cory Orosco Jimi Hendrix Mitch Mitchell Noel Redding Stories