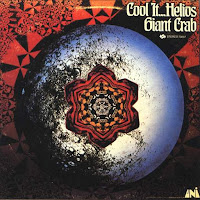 "A consistent follow-up by a late sixties soul-drenched sunny popsike (sic) crew... Except for the 1st narrated 'soundtrack' intro, the songs definitely sound chart-friendly and obviously bear strong hit-potential; some tracks should have been, some might have been, but most simply weren't, which is a shame because they're all compact and cleverly composed. The main themes emphasise won and lost love, and the obvious sikedelik (sic) escapism from it all. A big plus goes to the vocals which are crystalline clear, powerfully strong, and lavishly arranged. A professionally produced and remarkably fresh sounding album." (By Kula Shaker, My Generation)...

1. The Invasion Of Helios
2. Cool It
3. Hello Yesterday
4. Trust Somebody
5. Don't Make Me Leave You
6. What Became Of Yesterday's Hero
7. Welcome To The World
8. Help Yourself
9. It's Getting Harder
10. Who Can Teach A Songbird How To Sing
11. Everything Comes Sooner Or Later
12. Cleo
13. Don't Jump To Conclusions
14. Popcorn Double Feature
15. Walking In Different Circles
16. I Don't Want To Live This Way