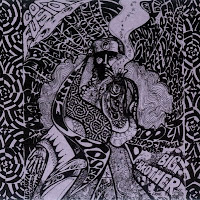 CONFUSION - Big Brother Featuring Ernie Joseph
"Influenced by the guitar sounds of Hendrix, Cream and Jeff Beck, The Bill Holmes produced "Confusion" is an incendiary classic of British blues style guitar rock. The band (not to be confused with the similarly named and of course more popular Big Brother and the Holding Company) made a name for themselves as a great live performance, often encouraging audience participation. Their on stage energy comes across well on the record, resulting in a loose charismatic album that only slows down long enough to sing a serenade on Wake Me In The Morning. The rest blisters through with searing guitar virtuosity from Ernie Joseph and an organ sound that shows no signs of prog's impending overindulgence. A rock record from start to finish."
(By Venenos Do Rock)... 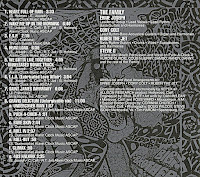 "Fringe-figure Ernie Joseph, the band's charismatic front-man, formed various groups around Southern California before finally forming his most successful effort, Big Brother, and signing to Bill Holmes' All American label in the late Sixties. The band's first, and unfortunately last release, Confusion, is intense, blues-heavy Southern California psych, which weighs in at the Hendrix-end of the spectrum. Known for its wild live shows, the band, despite being an important piece of the L.A. psych scene, was soon forgotten by all but a small army of devoted fans and collectors (who often break the bank to their hands on an original copy)."
(By Unknown)
_________________________

"Confusion came as a major in direction to anyone familiar with Ernie Orosco/Joseph's earlier pop & lyte-psych moves with Giant Crab et al. Material such as Heart Full Of Rain, L.L.A. (Lubricated Love Affair), and the bluesy Heavy Load offered up a set of Hendrix-styled guitar pyrotechnics. Elsewhere, the heavily phased E.S.P. (a reworking of the Pretty Things' L.S.D.) was actually a rehash of Giant Crab's final single. Given the abundance of guitar rockers, at least to our ears, the standout track was the atypical ballad Wake Me Up In The Morning. Sweet and sincere, it's a beautiful effort. Sure, it ain't the most original LP you'll hear this year and parts of the percussion-heavy closing suite drag, but the performances were enthusiastic, and it's an album I play on a regular basis."
(By Scott Blackerby, Acid Archives)
________________________