A Lifetime of Friendship and Music

When I met Ernie and the Emperors at the Dolphin Club in Solvang in 1965 I was only 14, but I'd already written a lot of songs and played a pretty damned good guitar. I may have looked like a little kid, but there was a whole lotta music inside of me.

The Dolphin Club was a members-only place that had a pool, dressing rooms, and a large dance hall that included a snack bar and tables. That year, the owners figured out they could make a little money by holding dances for the teens of Solvang, hiring bands from all over the tri-counties. Within the year it became a venue that a lot of bands vied for. There was nothing else for us to do in Solvang in those days; the closest entertainment of any sort was an hour's drive away and a lot of parents didn't like the idea of their kids driving the San Marcos Pass at night...

I took to Ernie and his band as quickly as I had the Beatles only a year and a half earlier. They were on Reprise Records, Frank Sinatra's label, which also was the home of the Kinks and soon to be Jimi Hendrix's label as well. The Emperors' single, Meet Me At The Corner, sold very well in California and because the local record store quickly sold out of it, I assumed the group were as famous as any other band at that time. I played that 45 record out, both A and B sides (the B side was Got A Lot I Want To Say). It now sells online for $30 and over. Not only was their sound fresh, they were really, really talented and they put on a great show; they were true showmen. And they wore dog collars, too. Very cool. I think I remember buying them matching dog collars that Christmas.

I don't remember actually going up to the stage and striking a conversation between sets. In fact, I don't really remember that night at all any more, but I must have introduced myself because I got their address. I know this because I wrote a letter to them. Yeah, a real fan letter, which I mailed in a black envelope with silver ink so that it would be easily spotted in the piles of fan mail I assumed they received. I was not only surprised when Ernie wrote back personally in his own hand, I was ecstatic. I took the letter to school with me the next day and proudly waved it about, which resulted in the envelope getting ripped as the girls tried to grab it from my hand. That's how popular they were. 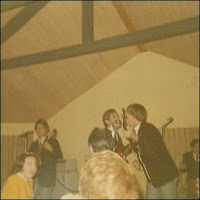 The Emperors returned in November and I and my friends were there. This time I brought my camera. My foster sister Ginger even went to the club that night, something she usually didn't do. I took pictures of them on stage and one of Ernie and Randy with my friends. Why didn't I get one of me with them? This is one of those pictures. Sorry it's so faded. Sorry, too, for the big blond hair in front. That's Ginger. The dark head above hers is my brother, who's dancing with a girl named Jean. Notice he's paying a lot of attention to Jean. He was a drummer in another band and had to check the Emperors out for himself after he'd heard me prattle on about them for a full month. After that, I went to quite a few of their shows whenever I could bum a ride out of town with someone.

After their gig, my brother invited the band to his house for some midnight breakfast. I called my dad and asked if I could spend the night with my brother and sister-in-law and he said sure, so I went back with them. It was great! While my sister-in-law made scrambled eggs, hash browns, bacon, and toast, we all jammed. Later, we sat around the kitchen table and I was just in awe of how nice they were. I was the envy of every girl in school when word got around!

One time my friend Cathie and I imposed ourselves on them by showing up at their house in Santa Barbara (as I look back, I showed up their house unannounced a number of times). They were all very nice to us, but in retrospect I'm sure they knew that we were just saucer-eyed fans. Because I was Drummer's sister (that was my brother's nickname), Ernie treated me more like a little sister and fellow musician than a fan.

I remember once—I think it was 1966—they took me with them to a Valentine's dance in Lompoc, but for the life of me I can't remember them picking me up, or being in the van with them, or coming home. I remember standing backstage in the wings taking pictures, feeling very in the loop. Real "I'm with the band" stuff. Hey, give me a break. I was 15!

In those days I had an incredible crush on Brian, but I don't think any of them knew that; I was just too shy to let anything like that show. One time when I was at their house, they were loading the van for a gig that night. As he carried equipment from the studio, Brian sang, You Didn't Have to Be So Nice, by the Lovin' Spoonful, giving me cute, shy, little smiles. I was sure he was singing it to me. 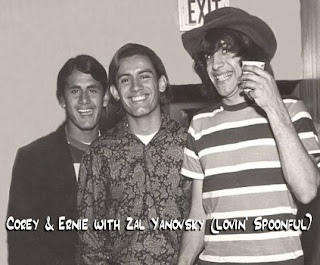 On the night of my last day of my sophomore year, my brother and I went with them to a Lovin' Spoonful concert at Earl Warren Showgrounds, where the Emperors were the house band. I'd brought my yearbook with me for them to autograph, which they did later that night. But before they had a chance, that clown prince of Rock, Zal Yanovsky, bounded up to me and grabbed it in his effusive way, signing it without my even asking him. And in huge writing that entirely covered the page I'd marked, "Reserved for Ernie". I was taken aback. I wasn't like most girls in the Sixties. I never wanted to marry a Beatle, I wanted to be a Beatle—and I certainly wasn't a groupie type—so my backstage experience was very different from that of most other girls. And Zally stealing Ernie's page just didn't impress me. It's funny now, of course. And he flirted with me, enjoying seeing me blush. Who am I to complain?

The group and I saw each other off and on through the decade of the Seventies, finally gelling once again in 1979 when, as Faith, they secured a weekly gig for several months at a club not far my house in Camarillo. I was there nearly every weekend and sometimes they'd bring me up on stage to sing backups. To this day I can't hear Get Together ("...Come on people now, smile on your brother. Everybody get together, try to love one another right now...") without singing my harmonic line. That's me with the tambourine and the rubber chicken. Pink overalls? Yeah, those were the days...

In the years that we've known each other, Ernie, Cory, and Brian have always remained true to Rock & Roll. They've rocked with everyone you can imagine and they've rolled with the punches. They've learned, assimilated, adapted, and kept on keeping on, and always in the spirit that their fans, audiences, and friends are all part of their family. I think that's what has made them go the distance, why people still enjoy not only their shows, but also their off-stage company as much as we did all those years ago. And people in the business love them and love working with them.

It's my honor to create this tribute site for my Big Brother Ernie.