Backstage with the Lovin' Spoonful

Growing up in southern California afforded me many opportunities to attend some incredible concerts. My older brother, Rick, and I were musicians, which opened doors to meet a lot of recording artists as well. Through our friendship with Ernie and The Emperors, we were part of something incredibly exciting, riding the tail of a comet. It was the Sixties after all, and music dominated every aspect of our lives from learning any instrument we could get our hands on to our clothing and hair, from our desire to make a better world through music and the joy it brings to the slang that peppered our speech. Man, it was an exciting time to be young! I don’t remember how it came to pass that Rick took me to the Lovin’ Spoonful concert at Earl Warren Showgrounds in the summer of 1966. I don’t even remember him being there. All I remember is that he was wearing a Nehru jacket. Why did we go? I don't think we had tickets. Was I planning to buy one at the gate? Did I talk him into making the hour-long drive over the San Marcos Pass? Did he just drop me off on hos way to a gig of his own? Something in me thinks we dropped in on Ernie at his house and he invited me to go to the concert, but if so, what happened to Rick?

No, I must have had plans to go to the concert because my mom would  never have allowed me to go to Santa Barbara at night for no good reason. Especially with my brother, who drove like a maniac because he spent more time drumming on the steering wheel and dashboard than he did paying attention to the road.

Ernie remembers that we met at the arena, but how did that happen? Had we made plans to do so? Was it a coincidence? These are things I just don’t remember. I do remember that I wore a brand new royal blue and purple paisley pantsuit, with white go-go boots. I also had that Pattie Boyd flip, as I recall, except that my hair was the color of Jane Asher's, and I thought I looked pretty sharp.

In the Sixties, the E.W. Showgrounds hosted some now historic concerts that included the Jefferson Airplane, Buffalo Springfield, the Rolling Stones, the Doors, the Yardbirds, the Grateful Dead, the Jimi Hendrix Experience, Jethro Tull, Moby Grape, Led Zeppelin, and just about anyone else you can think of. At the time, the Emperors were the house band so I suppose they were at every concert they could manage to attend when they didn't have a gig someplace else. They were a hardworking band themselves, and they performed constantly.

These concerts were produced by Jim Salzer, who briefly managed the Doors and who owned the best record store in the Tri-Counties area. He had a reputation of being a playboy, dressed like he just stepped out of a Carnaby Street boutique, and he drove an Excalibur. I went to a party at his house once in 1969, but I don’t remember anything about that either.

The Showground concerts were always held in the Kramer Arena, an oval, open-air facility that was built for dressage events, horse shows, and rodeos. People sat in the covered area, but most were on the dirt floor, where chairs had been set up. There was a definite bovine/equine aroma in the arena, but who cared? The music was always great and the vibes were groovy. Santa Barbara was hippie mecca, thanks to UCSB.

Because of the Emperors' position there, we had no trouble getting in the backstage door with KIST DJ Johnny Fairchild. We walked into a corridor that was full of people. Just to the right was a door that kept opening into a kind of dressing room where there was a lot of noise--voices and laughter--and a lot of sweet-smelling smoke. I quickly sussed out that was where the Spoonful were. We went on toward the arena and up into a semi-enclosed area, where, during the horse and cattle events the announcers sat at their microphones. In front of this was the stage, which I couldn’t see very well due to the speakers and amps.

Having reserved a page in my yearbook for the Emperors, I clutched it to my side as I watched all the hub-bub going on around me. I’d been backstage before, but never for a concert of this caliber, and it was really exciting. I was shy in those days, so Ernie made sure I was okay, then the Emperors' photographer, Richard Savage, took him and Cory to have their pictures taken with some of the luminaries that were there. I think the boys had as many fans there as the Spoonful. I felt very “I'm with the band”, although I didn’t know that phrase yet. It felt great! 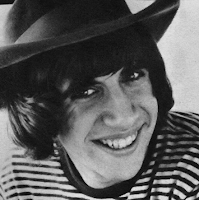 Suddenly, like a tornado, an energetic presence bounced up to me with a huge, infectious smile on his face, and grabbed my yearbook. It was Zal Yanovsky. He opened the book to the Emperors’ page and signed his autograph across it in a script that took up the entire page. I was stunned, and I said softly, “That was the Emperors’ page.”

Zally looked down at where I had written Reserved for Ernie and The Emperors and his face kind of dropped. “I'm sorry. Is there another blank page?” Then he smiled again, his dark eyes looking into mine. “Probably not, cute as you are. Bet every boy in school signed it.”

I was embarrassed, and I’m sure I blushed. I had a bad habit of that back then. “Oh, it’s okay,” I said. “It’s just a stupid yearbook.”

I laughed and he was all smiles again. He hugged me, told me to enjoy the show, and he was gone just as quickly as he’d appeared.

Ernie returned then and asked me to follow him, and we went around the corner and back into the corridor where Cory was and where more pictures were taken. Ernie remembers that just as they were posing with John Sebastian, the camera jammed. John took it in his stride and explained that he had to go get ready for the show anyway, and he left. Unfortunately, there also was no picture taken with drummer Joe Butler.

Feeling more emboldened, and seeing John Sebastian talking with his girlfriend (or wife), I went over to introduce myself. It was a stupid thing to do because they were actually in the midst of a heated argument. She had her hair up in those huge soup can curlers and was really giving him what-for. I felt embarrassed for him and decided to turn around and leave. He saw me before I could leave, though, scowled, and told me to go away. That kind of shocked me and I went back to where Ernie and Cory were. All the same, Ernie remembers all of the Spoonful as polite, amicable, and devoid of rock star ego. As I said, I’d simply picked the wrong moment to approach John Sebastian. Don’t worry. I liked him anyway. Raised with musicians, I was used to their moods.

The Leaves opened the concert, performing their hit, Hey Joe and a number of other songs. At last the Spoonful went on stage and they performed perfectly. They sounded really, really good, and although he’d kind of hurt my 15 year-old feelings, I was impressed with Sebastian’s musicianship. Ernie says that Jim Pons, who played bass with the Leaves, was a super nice guy, also very polite. He would go on to join the Turtles and the Mothers of Invention.

I don’t remember leaving or going home, but I’ll never forget how kind and truly lovable Zally was, and if I could, I’d thank him. Unfortunately, he passed on December 13, 2002 of a heart attack. Wherever he is, I’m sure he’s making people laugh.

Because I wasn’t really a Lovin’ Spoonful fan, I’ve never counted this experience as one of my high points, not like meeting Hendrix! Don't get me wrong. I liked their music and had a couple of their LPs, but more than their Top 40 hits, I preferred Night Owl Blues and Lovin' You (a song I added to my repertoire when I began my own music career). That stuff. The night of their concert, I was more excited about being there with Ernie and Cory. That meant everything to me, and that evening was the first time he called me, “Little Sis”, a name he calls me to this day.