Once a Don, Always a Don!

We all know Ernie Joseph is a brilliant musician, but did you know that he was a football star?

Ernie began playing in the seventh grade and carried on through his freshman year of college. He became the Junior Varsity quarterback and co-captain under Coach Charles Sylvester. During the next couple of years the team at Santa Barbara High School, under the expert coaching of former the great San Francisco 49er Sam Cathcart, were fortunate to have several great quarterbacks, so Ernie, with his famous team spirit, changed his position to wide receiver and defensive back...

"My fondest memories while playing at SBHS are of the times NFL great Sam "the Bam" Cunningham and his friends would come to Peabody Stadium to watch us practice...

Among Sam's friends was Grady Hurst, one of the best quarterbacks ever, whose older brother Charles Hurst had played with me since seventh grade. Cunningham's younger brother Randall was  also An NFL great who played for the Philadelphia Eagles. Our band played for his ninth grade graduation at Santa Barbara Junior High. Sam was there, and we rekindeled some fond memories of back when we were called Greg Munford & The Giant Crab and played at after-game dances held at SBHS gym.


The Cunningham brothers recently had their numbers retired on May 29th, 2010 during a halftime ceremony in an alumni game between SBHS & San Marcos High. The game was held at Peabody Stadium. It was a great game that ended in a 10-10 tie. We really had a good time, but I'm glad I wasn't playing. They had some 300 lb-plus guys that would tear me in half! We had alot of family and friends on both sides, and both teams won!"

Ernie says that one of his great moments was during a Junior Varsity game against Santa Maria High School.

"With two seconds remaining, I threw a touchdown pass to SBHS hall-of-famer Gordon Nadel to save thew game. Nadel's county record of a 96-yard touchdown run against Loyola High School in a CIF championship game was broken only a few years ago. I will always cherish those fond memories."

When he entered his freshman year at Santa Barbara City College Ernie was talked into trying out under coach Don Turner, who wanted to use him at the tailback position. Unfortunately, it was a brief stint because he injured his ankle and had to bow out of playing.

Ernie's newphew David was an all County All Star at San marcos High. He raised him as a toddler, supported him,and even canceled gigs to watch him play.

Ernie's still true to the game and is often spotted at Peabody Stadium cheering on the Santa Barbara Dons. But he's not just a spectator; Ernie's happy to play friendly games with friends and family whenever a football is brought out. It's not unusual to see him and famous rock musicians passing the pigskin during recording session breaks! 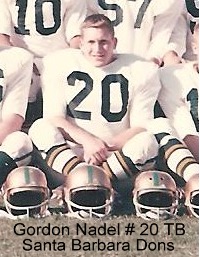 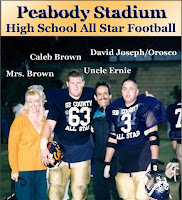