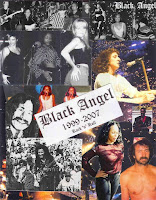 This summer is turning out to be a busy one for Ernie, which gives us a lot of opportunities to see him perform live!

Besides his ongoing gig at the Old Town Tavern, he's added two dates at Borders Books on State Street in Santa Barbara, where he'll be performing with Black Angel, an exciting, fun group that plays good time Rock 'n Roll. What better way to spend a Saturday and Sunday afternoon than hanging at the beach, enjoying a tall cold one in a sidewalk cafe, and then listening to some great music.

Plan to be there!

Black Angel has been described as "The  Rolling Stones Meet Tina Turner." They've played all over LA, including the Martini Lounge, Sruffy O'Shea's, The Joint, The West End, The Roxy, Chase Palm Park, The Wild Cat lounge, Roys, B.B. King's House of Blues, Paladino's, S.I.R. Showcase, as well as the Coach House in San Capistrano.

One Beer, from the O'California album, was selected as the Song Of The Year for 2007 by Chuck Eddy, Senior music Editor for Billboard Magazine in New York. One Beer has received over 10,500 plays on MySpace.

A Tour of the United States is now being organized with the assistance of Big Daddy J of Outlet Promotions.