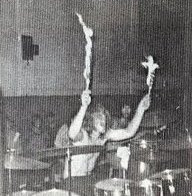 Fans of Big Brother Ernie Joseph are saddened to hear the news of the passing of the band's drummer, Steve ("Stevie D") Dunwoodie. Steve passed away at Renown Medical Center on New Years Day, 2011. Steve was a kindhearted and loving father who also had more than just a knack for playing drums. To everyone who knew him, he was the best in the business. After  touring the southern United States in 1969 and 70 with Big Brother Ernie Joseph, Steve eventually decided to settle down with a wife and family while pursuing a career in warehousing...

Ernie remembers Steve as a charismatic, tireless performer who left the audience screaming.


"Steve's energy pumped up the whole band to do better,
beyond our capability."

Known for his vibrant solos during which he played with his sticks on fire, Steve set the energetic pace for all of Big Brother's shows.


"We first met Steve when his band, Jonathon Goodlife, did a show with us at Lake Tahoe, California. We were totally impressed with his drumming and showmanship. He joined us for the Southeast Tour with the Big Brother Ernie Joseph band. Steve was a superstar team player, really a stand-out drummer. Steve would take-off on the song ESP with a 20-minute drum solo, where he would play, then play with his hands, then walk off the drum set still playing with his sticks. Then he would tap on the mic and his body and "sing" drum parts. He would then get the crowd chanting repeatedly, "Peace now! Peace now!" He would finish his drum solo playing with his sticks on fire and, incredibly, he made his magic happen consistently every performance.  Like everytime he got the ball, like a superstar football player, he would take it all the way to score big time. Steve was amazing with his contagious non-stop positive energy and his drive and determination. We all did our part, but Steve's energy took us to another level. He really made us a complete concert act, and the crowds loved it!" (Brian Faith)